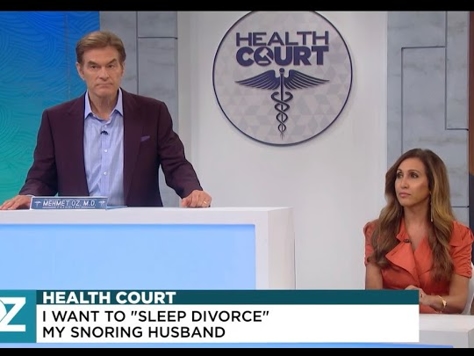 In the episode—or “case”—featuring Attorney Ziegler, the parties were a married couple who disputed whether the husband suffered from sleep apnea, causing him to snore so loudly that his wife cannot sleep. “Sleep apnea” is a condition where a person intermittently stops and starts breathing during their sleep.

The wife asked the “Health Court” for a “sleep divorce”—to separate the couple at night so the wife can get an uninterrupted good night’s rest. The husband denied suffering from sleep apnea.

Accordingly, Dr. Oz issued a “temporary order” to separate husband and wife for sleeping purposes until the husband gets treatment for his mild sleep apnea. Dr. Oz admonished that, although treatable, sleep apnea can be a very dangerous medical condition.

Although Attorney Ziegler’s role in Dr. Oz’s health court was meant to promote an entertaining way of educating audiences about medical conditions, her real-life role as a reputable family law attorney qualifies her to litigate real divorces in an actual court of law. Her extensive experience on Settlement Panels throughout New Jersey and as a frequent lecturer on legal issues—including divorce and civil rights—makes her a high-demand legal resource for various media programs and shows.

Call Ziegler, Resnick & Epstein at (973) 878-4373 or complete our online request form to schedule a consultation.